So this is my first time back on my blog from the insane month of June- where I posted every business day (minus 2 days, woops my bad)(professional blogger status is slipping)- and I’ve got to be honest, I wasn’t looking forward to this post. I intended to make this post on the 30th of June (the last day of June) as sort of a ‘good-bye’ to everyday posting and how it all went down- the struggles and the successes, blah blah blah- but now you get it today, on the 3rd of July. So here it is, in all of it’s glory.

Why didn’t you post this on June 30th like you planned, you pleb? I haven’t been home for the past couple of days, and I was without a computer, so put two and two together= no blogging. In some ways, I’m happy I got the break because, like I mentioned before, the month was a struggle. Turns out taking a full load of classes and posting everyday is not the easiest combo (it doesn’t take a genius to figure that out)(but it does take a very ambitious and insane worm to actually do it). Most of the month I would be busy all day with classes and then write/post that day’s blog post at midnight (making it confusing what day they were actually for)(but I was definitely dedicated, you can’t say I wasn’t dedicated lol). To nobody’s surprise, that really started taking a toll on me- in fact, week 2 I already felt like I was fucked, and I’m surprised I actually went through with it.  Daily blogging is wild, so to all of those who do it: bless you, you blogging gods.

That being said, there was a lot of success! June was by far the best month for stats (which is what I wanted to achieve in the first place)! Still, I think the best part of the whole experience was to see all of your reactions and comments- just overall getting closer to you guys. I’ve never been so close to my followers, so that has made a real impact on me. All of you are so funny and incredibly sweet, and there would be absolutely no way this blog would still be going if I didn’t have all you guys for motivation- so thank you! This blog has really expanded my horizons and I’ve gotten to talk to people I would’ve otherwise had no chance in the world to meet.  I must admit, when people say the cliché claim that ‘kids these days spend too much time on technology that they never actually talk to people’- OH I get pissed (and quite defensive). I have a whole new respect for online relationships, and in general I have such a better idea of humanity. Before blogging, I thought all people sucked- blunt, but no joke. In other words, you guys have given me faith in humanity aha so good on you, changing a pessimist.

Now, unfortunately, I am going to go back to the struggles of the month because that’s where I left the month- struggling. Like I mentioned before, this post was meant to be posted on the last day of June, and I’m actually quite sad that I didn’t have the chance to post it. I feel guilty, like I let you guys down in a sense- even though I know you guys are the best and don’t mind me being trash; after all, it is expected. However, I still feel a bit shit about it, because I let myself down at the very end. I try to not beat myself up over these things, but I must admit it doesn’t come naturally. I am my own worst critic, and missing that post has bitten my ass. That being said, I haven’t felt myself for the past couple of days, and I’ve been trying to go through each and every variable for a reason why this is the case, but I’m having a hard time finding one- which sucks.

Part of me wonders if it’s just because it’s Summer because I don’t do well in the Summer(hey Lana, I got that Summer time sadness for real tho) . I tend to be less busy in the Summer, and I’m someone who has to stay busy to feel any kind of self-worth. Yet, this Summer I’ve been super busy, so that reason made little sense to me.

So then I thought of what I’ve been busy with- which is school. Usually during the Summer, I am busy with friends and scheduling literally every hour of the day so that I am preoccupied with someone or something (like I said, I’m someone who needs to busy). This Summer isn’t like any other Summer, because I’m the only one of my friends that is taking a hefty Summer class load (minus maybe 1 friend). It seriously bugs me that so many people are finally in town after being away at school all year, and yet I don’t get to see them because I am stuck in a damn chemistry class that I took in high school (it needs to be taken for transferring but why me).

**Side note: My neighbor’s kids just started screaming. Maybe that’s why I’ve been out of it- aha no that’s normal, fuck them. Screaming fetuses are the reason why kids disgust me.

Anyways, long story short, I’m a little bit of a scrambled mess right now- and the thing is I don’t even know what I’m feeling. I’m not necessarily sad, or mad, or depressed, or any of that. I guess at the moment, the best word that could fit to this feeling would be unfulfilled– and like I said, I’m still trying to find a reason why. (13 reasons why, anybody?)(Anybody?)(No?)(It’s chill)

So while I’m a trash heap, I find it hard to write blog posts that are uplifting or high-energy, because that’s just not me at the moment- and for that, I am sorry. Not only to you guys, but to myself because I am fucking reaming myself right now (worst critic back at it)(better than ever- rip me). Also, if you’ve notice, I tend to combat feeling shitty with shitty jokes- so if you’re new to my blog and you think my humor is already crap.. well it doesn’t get better aha (what a wonderful start to my blog for those who are new- kill me).

Anyways, I plan to be posting quite a bit less this month- for my own wellbeing. For the month of July, I will be posting every Tuesday and Friday. That’s twice a week, which is a little bit saddening coming from posting every business day, so I will occasionally post extra posts during the week (like this one, ayy what’s good Monday bishes?). Also, this week I will be doing wrap up posts for June (aka June Favorites & Cool Things that Happened in June), so expect this week to have some extra posts!

This is one of the most honest posts, if not the most honest post (now that’s a tongue twister), that I have written on this blog- ever. I feel a bit exposed at the moment, but in a way I feel relieved that you guys will understand my current mindset. Now I don’t want you guys to be too worried about me, because that’ll make it seem a lot worse than it actually is. Give me some time to bounce back and I’ll be back and better than ever- trust me.

**If this whole posting twice a week thing isn’t enough for you, hit me up on Insta where I post everyday: @wormal.bish 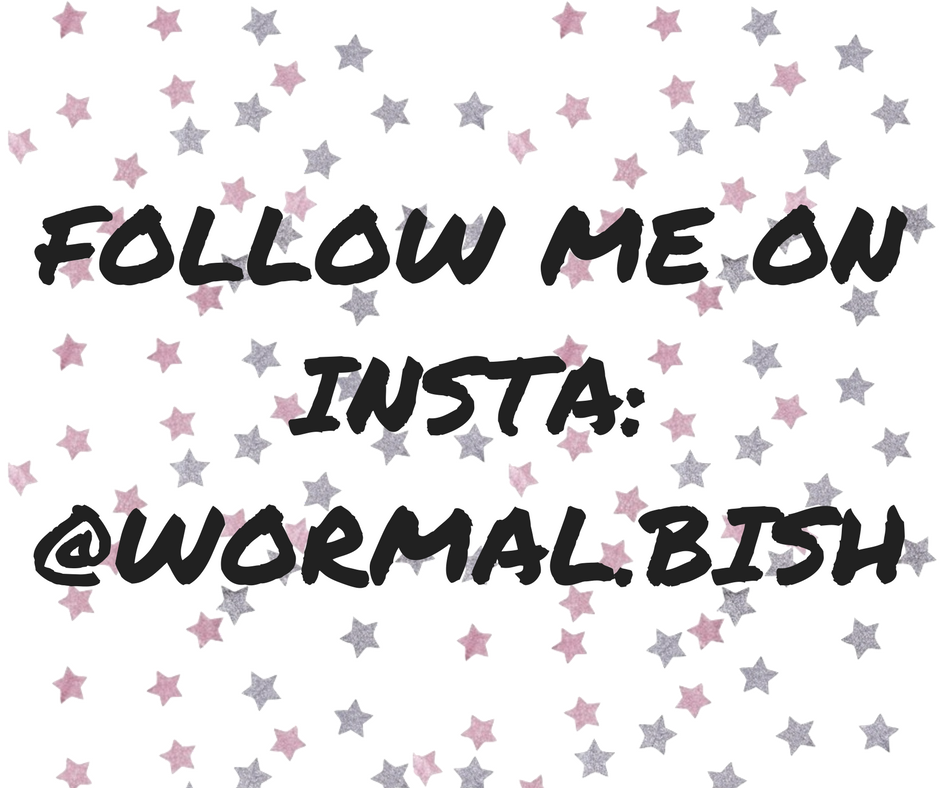